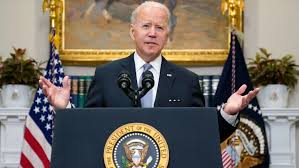 The President of the United States of America (USA), Joe Biden, has announced a ban on Russia-affiliated ships in US ports after meeting with Ukrainian Prime Minister Denys Shmyhal in Washington.

As part of further sanctions, US President Joe Biden said the US will ban Russia-affiliated vessels from US ports

“Today, I’m announcing the United States will ban Russia-affiliated ships from our ports, as they did in Europe,” President Biden said in remarks following his meeting with the Ukrainian Prime Minister.

“That means no ship — no ship that sails under the Russian flag or that is owned or operated by Russian interests will be allowed to dock in a United States port or access our shores. None. None,” President Biden said.

The US president said the move is “another critical step” with partners in the European Union, the United Kingdom, and Canada and beyond “to deny Russia the benefits of the international economic system they so enjoyed in the past”.

President Biden said the US Treasury had enacted further sanctions and related measures to enforce sanctions.

The US Government has provided US$1Bn in support to Ukraine over the last two months, the president said.

New EU sanctions against Russia include a port ban.

The United Kingdom has also closed its ports to Russian vessels.
The  EU has also called for a broader ban on Russia.
The EU is also to double down on renewables and hydrogen and diversify to rid itself of Russian gas.
The EU announced the fifth round of sanctions against Russia including a port ban on Russian vessels, without a set timeline for when they will come into force.Russia-operated vessels, with some exceptions, will be banned from EU ports, and the EU trading block will no longer import coal from Russia, cutting an estimated €4Bn (US$4.36Bn) per year from Russian coffers.

The UK announced a ban on Russia-linked vessels coming into its ports in early March but has been slow in setting out clear directions on how to implement the ban, pushing responsibility on to port authorities to identify and refuse vessels even when highly complex ownership structures can make isolating ties to Russian interests difficult.

The European Commission has proposed a draft plan to make Europe independent of Russian fossil fuels “well before 2030,” starting with gas, in light of Russia’s war in Ukraine.

The draft plan was announced in early March on the same day the US committed to a total embargo on Russian energy and the UK announced a phase-out of Russian oil and gas to be complete by the end of 2022.

Both US and UK imports of Russian energy supplies make up a far smaller percentage than those taken by the EU.