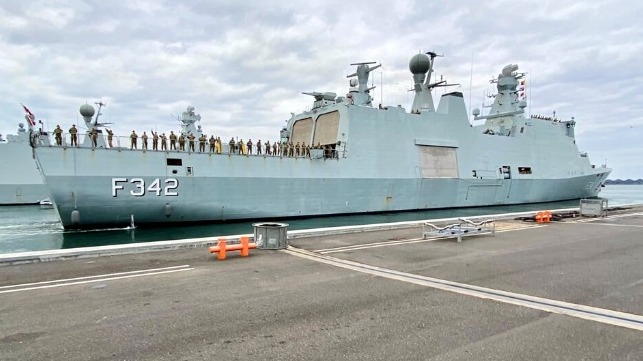 A suspected Nigerian pirate arrested by the Danish Navy in November 2021 after shooting off the coast of Nigeria has been charged in Denmark with endangering the lives of Danish soldiers, the prosecution announced Monday, May, 9th, 2022.

”We have carried out a thorough assessment of the elements of the investigation and on this basis, we believe that this 39-year-old man should be charged with endangering the life and the physical integrity of Danish soldiers”, explained, Per Fiig, the prosecutor in charge of that case.

The unnamed Nigerian, who had lost a leg in the exchange of fire with the Danish Navy soldiers, faces right years in prison if convicted.

At the end of November 2021, a total of four suspected pirates had been arrested during the clash which took place during an anti-piracy mission by the Danish Frigate in the international waters of the Gulf of Guinea.

The man charged on Monday was seriously injured during the clash and had to be amputated at a Ghanian hospital where he was flown to before being repatriated to Denmark in early January.

Three other men who remained on board the Frigate had since been released as a result of the terms of their possible transfer to Denmark constituting a legal imbroglio.

Denmark has never transferred pirates to its soil and does not have an extradition agreement with neighboring countries.

During the incident in November 2021, four other suspected pirates were killed and the ninth pirate was thought to have fallen overboard, according to Danish authorities.

A black spot for shipowners, the Gulf of Guinea, which stretches 5700km from Senegal to Angola, recorded 52 pirate attacks in 2021, compared to 115 for the previous year, according to the Maritime Information Cooperation Center.

The drastic reduction in the pirate attacks in the region has been attributed to the comprehensive and coordinated anti pirate efforts of the regional government and agencies which were led and coordinated by Nigeria.

The Danish frigate Esbern Snare has cut short its one-month anti-piracy mission in February to return to Europe to complement the forces made available to NATO by Copenhagen because of the outbreak of hostilities in Ukraine.