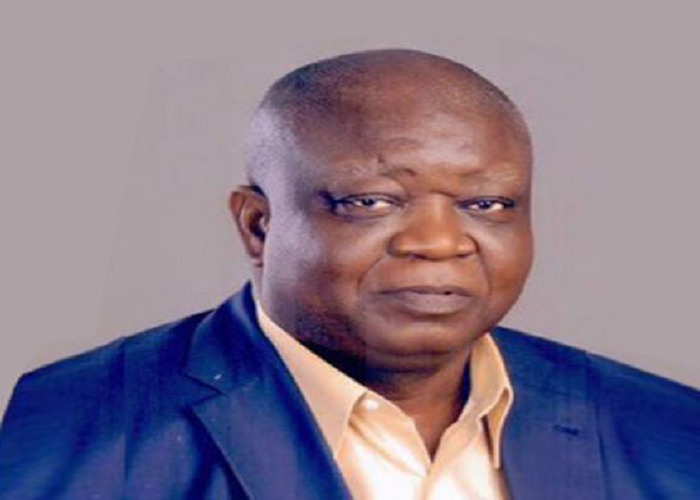 The Managing Director, Nigerian Railway Corporation (NRC) Mr Fidet Okhiria has said the Corporation had begun the processing of Expression of Interest (EOI) by the 1,100 bidders for 2021 capital projects.

Okhiria revealed this Thursday during the exercise at the Railway Headquarters in Lagos.

Okhiria, who was represented at the event by Director, Operations of NRC, Mr Niyi Alli, said the processing was conducted publicly for transparency, in line with the Procurement Act.

Okhiria stated that after the technical evaluation of the proposals by the bidders, the qualified bidders would be selected for specific projects.

The NRC boss added that the agency adhered to COVID-19 protocols by allowing 150 bidders at a time during the processing of their documents.

He said the corporation would move to the next stage of the project in two weeks’ time, after processing all the expression of interest documents.

While speaking, the Director of Procurement of NRC, Mr Benjamin Iloanusi, said the corporation advertised the available projects in daily newspapers, Federal Tenders journals and on its website.

Iloanusi said over 1,100 documents were received, and that due to the Convid-19 pandemic, the NRC decided to restrict the processing of the bidders to 150 per session.

“At the close of the seven weeks advert notice, we now opened their documents in the public and in the presence of some Non-Governmental Organisation (NGOs) and the bidders.

“We are checking the eligibility of presented documents such as Corporate Affairs Commission (CAC), Industrial Training Fund Certificate (ITF) among others,” Oloanusi said.

Some of the bidders expressed satisfaction with the open bidding.

One of the bidders, the Chief Executive Officer (CEO), High Destiny Security Ltd., Mr Daniel Tishene, submitted that the opening of the project tender was highly transparent.

Tishene said he was able to use the processing to submit additional documents such as a medical retainer, professional indemnity, insurance policy and other required documents by the NRC. 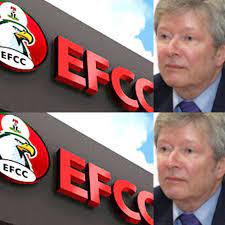 Justice D.U Okorowo of the Federal High Court sitting in Abuja has convicted and wound up Marqott Nigeria Limited,  one of the 30 companies associated with the  Process and Industrial Development Limited, P & ID,  for money laundering.

The company was convicted on Thursday,  June 16, 2022, after being found guilty of four-count charges bordering on money laundering preferred against it by the Economic and Financial Crimes Commission, EFCC.

Count one of the charges read: “That you, Marqott Nigeria Limited, being a designated Non-financial Institution; and Giovanni Beccarelli, Valentina Fantoli, and Dimitri Duca, being directors of and signatories to the bank account of Marqott Nigeria Limited, sometime in September 2014, in Abuja, within the Abuja Judicial Division of the Federal High Court, failed to comply with the requirements of submitting to the Federal Ministry of Industry, Trade and Investment, a declaration of activities of Marqott Nigeria Limited contrary to Section 16(1) (f) read together with Section 5(1)(a)(ii) of the Money Laundering (Prohibition) Act, 2011(as amended and you thereby committed an offence punishable under section 16(2)(b) of the same Act.”

Count two read:  “That you, Marqott Nigeria Limited, being a designated Non-financial Institution; and Giovanni Beccarelli, Valentina Fantoli, and Dimitri Duca, being directors of and signatories to the bank account of Marqott Nigeria Limited, sometime in September 2014, in Abuja, within the Abuja Judicial Division of the Federal High Court, failed to develop programs to combat money laundering and other illegal acts, to wit: failure to designate at management level a compliance officer within any strata of Marqott Nigeria Limited, contrary to Section 16(1)(f) read together with Section 9(1)(a) of the Money Laundering (Prohibition) Act, 2011 (as amended) and you thereby committed an offence punishable under Section 16 (2)(b) of the same Act”.

At the point of the first arraignment on February 7, 2022,  the defendant pleaded “not guilty” to the charges, setting the stage for a full trial.

In the course of the trial, the EFCC presented many witnesses and tendered many documents as exhibits.

In his judgment,  Justice Okorowo found Marqott Nigeria Limited guilty of all the four-count charges and convicted it accordingly.   He also ordered that the company be wound up  and its entire assets forfeited to the Federal Government of Nigeria.

Marqott was first arraigned on Monday,  February 7, 2022, for being an accomplice in the $9.6bn Gas Supply and Processing Agreement between the Ministry of Petroleum Resources and  P&ID. 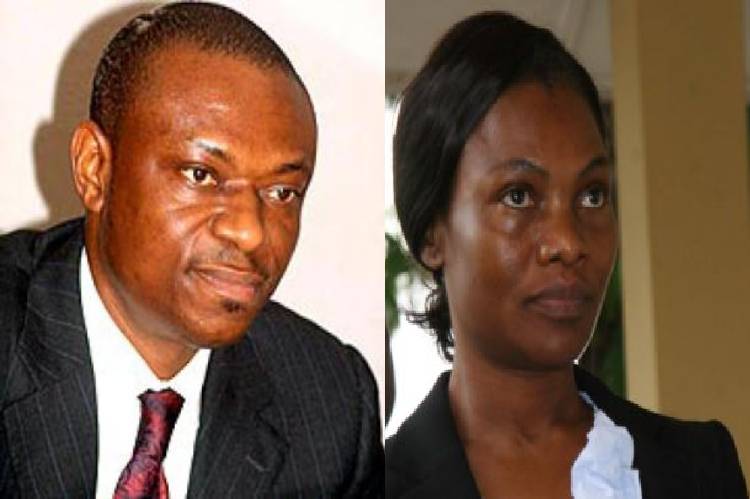 A three-man panel of the Court of Appeal, Lagos Division,  on Thursday, June 23, 2022,  upheld the conviction of a former Managing Director of the defunct Bank PHB Plc, Francis Atuche, as well as the bank’s former Chief Financial Officer, Ugo Anyanwu.

Atuche and his co-convict, Anyanwu, had approached the appellate court to set aside their conviction by Justice Lateefa Okunnu of the Lagos State High Court sitting in Ikeja, Lagos on June 16, 2021, over a N25.7 billion fraud.

The panel, comprising Justices Sadiq Umar, Adebukola Banjoko and Kayode Bada, while resolving all the issues in the appeal in favour of the Economic and Financial Crimes Commission, (EFCC) except the sentencing, also clarified that Atuche’s jail term was 12 years concurrently, rather than 120 years,  handed down by the lower court, if calculated consecutively.

Also,  the panel reduced Anyanwu’s jail term from 10 years to eight years and affirmed the discharge and acquittal of Atuche’s wife, Elizabeth.

In an abridged ruling read by Justice Umar, the three-man panel upheld the EFCC’s arguments and unanimously dismissed the appeal.

It would be recalled that,  in 2021, Justice Okunnu, while sentencing Atuche and Anyanwu, had upheld the arguments of the prosecution counsel, Kemi Pinheiro, SAN.

About three years after their arraignment by the EFCC in 2011, they had approached the Court of Appeal, to challenge their trial by the lower court for lack of jurisdiction.
But in a judgment delivered in September 2016, the court ordered Justice Okunnu to hands-off the trial but did not quash the numbers of counts against the defendants.
Consequently, the EFCC  approached the Supreme Court to set aside the judgment and order a trial in the matter.
In its judgment,  the apex court directed that the case be returned to Justice Okunnu for the continuation of trial.
While the trial lasted,   Pinheiro opposed Atuche’s contention that the funds in dispute were loaned and not stolen.
Delivering judgment, Justice Okunnu had held that “The first and third defendants did not debunk the evidence of the prosecution that the loans were used to purchase shares.
“They rather contended that the monies granted as a loan could be used for whatever purposes.” The trial court,  therefore, sentenced Atuche and Anyanwu, but acquitted Atuche’s wife. 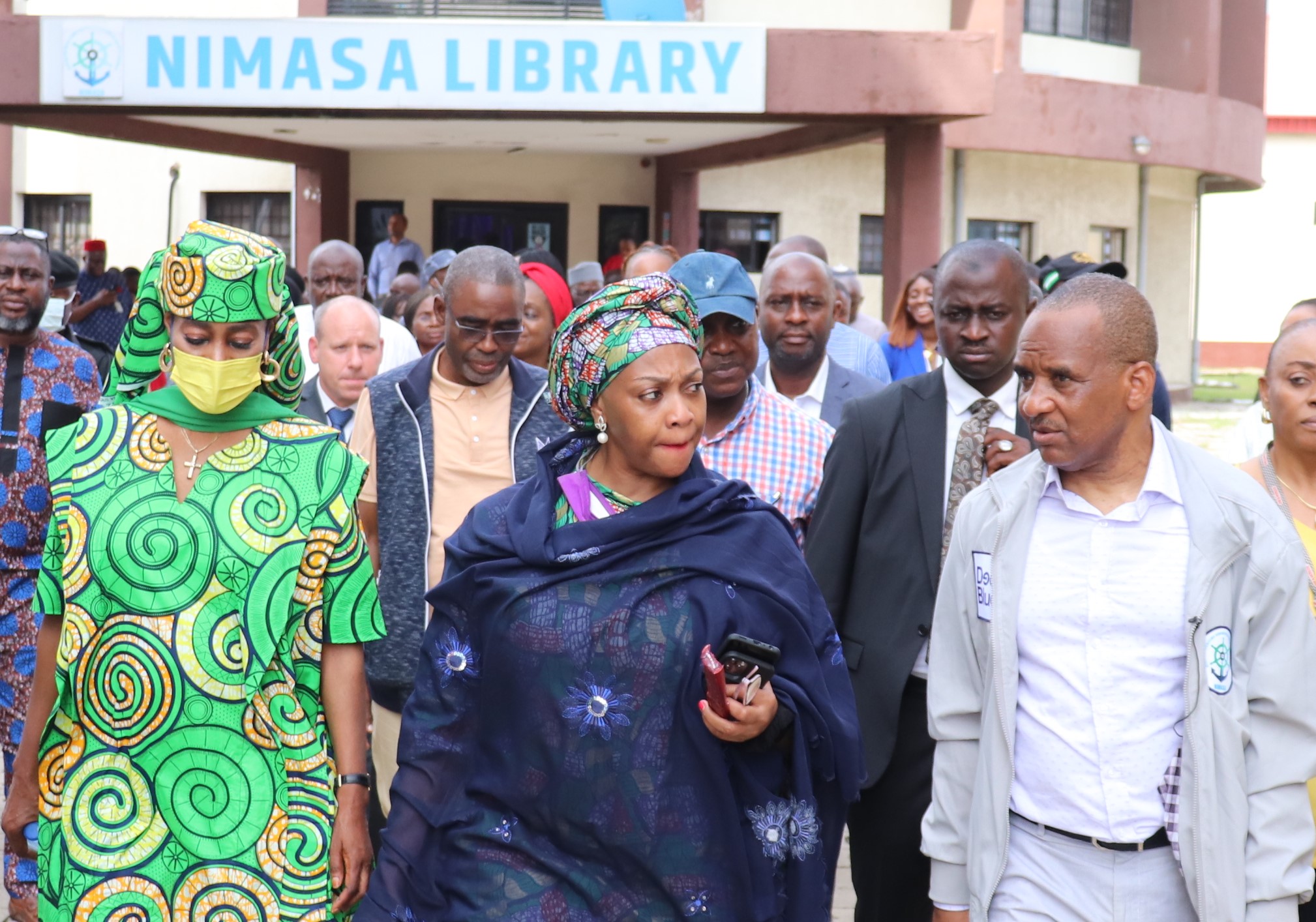 — as Lloyd’s of London meets September with stakeholders
Eyewitness reporter
The Director-General of the Nigerian Maritime Administration and Safety Agency (NIMASA) has given assurance of early resolution of the vexed issue of war risk issuance slammed by the international shipping cartel on Nigeria- bound cargo.
The surcharge was imposed on Nigeria-bound cargo during the heady days of piracy on Nigerian waters.
But due to the efforts of NIMASA with the collaboration of other sister agencies, pirate incidents were brought down to a minimal level so much so that Nigeria has had zero piracy attacks since the beginning of 2022.
This has led the country to be removed from the red list of pirate nations in March 2022.
However, despite this feat, the international shipping cartel still maintains the war risk insurance on Nigeria- cargo.
This has made NIMASA embark on a campaign to make the shipping cartel drop the surcharge. 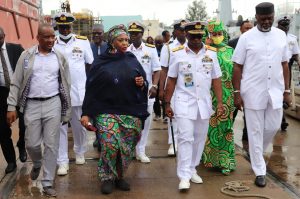 However, Dr. Jamoh, while speaking during the tour of NIMASA facilities in Lagos by the Minister of State for Transportation, Senator Gbemisola Saraki, gave an indication of early removal of the surcharge.
According to him,  the Lloyd’s of London, which are the coordinators of insurance surcharges on Nigeria- bound cargoes, will meet in September to deliberate on Nigeria’s request for review of the surcharge.
” Our hope is that by September this year, the issue of War Risk Insurance will be addressed when the Lloyd’s of London, coordinators of insurance surcharges on Nigerian bound cargoes meet to deliberate on our position paper which highlights the short, medium, and long term plans to sustain the achievements in our war against piracy in Nigeria” NIMASA DG declared.
Meanwhile, Senator Gbemisola Saraki has expressed satisfaction with the management of NIMASA while she was on a tour of the assets and equipment of the agency in Lagos on Wednesday.
Among the assets inspected included the NIMASA Command, Control and Computer Centre (C4i), the NIMASA Modular Floating Dockyard, the NIMASA E-library and Vessels belonging to the Agency undergoing dry docking at the Naval Dockyard Victoria Island.

The Honorable Minister expressed delight at the equipment and assets of NIMASA, stating that it underscores the importance the Federal Government attaches to combating maritime crimes and ensuring zero tolerance for illegal activities on the nation’s territorial waters.

While commending the synergy and collaboration amongst agencies of Government in the maritime sector, the Honorable Minister expressed delight at the fact that Nigeria has witnessed piracy-free waters since 2022.

Accordingly, she said; “for over 28 years, we have been in the press for the wrong reasons, over the piracy issues at the Gulf of Guinea (GoG).

” We were there when Mr. President commissioned the DEEP BLUE PROJECT last year and within that short frame of time, we have broken the jinx, and for the last five months zero attacks, so I think that says it all for my assessment of NIMASA”.

Furthermore, Senator Saraki noted the need to sustain the momentum to ensure Nigeria remains attractive to investors, adding that the Ministry is delighted at the steps NIMASA is taking to address the issue of War Risk Insurance premium on Nigerian Bound Cargoes. 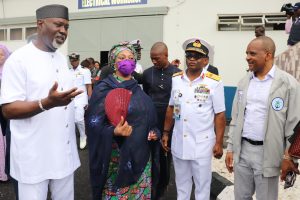 “The most important thing now is that we don’t rest on our oars. The Free Trade Agreement and how it affects Nigeria is our focus.

“We hope to create an enabling environment to be very attractive and highly competitive when compared to neighboring countries and collaboration amongst all maritime agencies of Government in terms of information gathering and sharing is key in achieving this”. she said.

However, the Director-General of NIMASA, Dr Bashir Jamoh disclosed that the focus of the agency is sustaining the achievements in recent times, adding that the plans are in three categories of short medium and long term.

“Our focus now is to sustain the tempo

“We are very optimistic that the clamour for the removal of war risk insurance premium on Nigerian bound cargos will soon yield positive results.
” The international community desires sustainability of Nigeria’s war on piracy and maritime crimes. The good thing is that they are part and parcel of our processes and procedures.
“We have the Nigeria Join Industry Working Group where all stakeholders including the INTERTANKO, the largest owners of tankers in the world, the INTERCARGO, the largest owners of Cargos in the world and the major oil marketing companies meeting regularly discussing developments in the Nigerian Maritime industry.
” We have also strengthened our collaboration with the Nigerian Navy.
” The SHADE Gulf of Guinea is another platform where inter-regional organisations such as the ICC and the European Union foster collaboration to secure the Gulf of Guinea.

“Though Nigeria was removed from the red list of piracy nations on the 3rd of March this year, it is natural that the international community will desire sustainability.