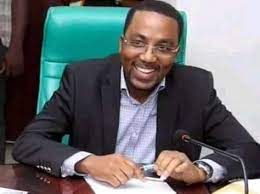 Eyewitness reporter
Data Centre for Rural Development, a Non-government organisation,  has faulted the appointment of Mohammed Koko as the Acting Managing Director of the Nigerian Ports Authority (NPA), saying he was as guilty as Hadiza Bala Usman in the alleged under- remittance to the Federal accounts.
It could be recalled that Hadiza, the Managing Director of NPA, was suspended from office over alleged under -remittance of an operating surplus of NPA to the Consolidated Revenue Fund (CRF) by the NPA management under her leadership.
However, Koko, who was the Executive Director of Finance and Administration,  was appointed in her stead as Acting MD.
The Coordinating Director of the NGO, Moses Uvomata, while speaking on Wednesday with newsmen, condemned what he described as a faulty arrangement, saying it was unjust and wrong for the Nigerian government to suspend Hadiza Bala-Usman but rewarded the Executive Director of Finance and Administration, Mohammed Bello-Koko,  who was responsible for initiating remittances in question.
He said in every organisation, the person that is responsible for such remittance is the Executive  Director of Finance who failed in his duties.

The activist believed that if Koko, as the ED,. finance had implemented the right Enterprise Resource Planning (ERP) solution, a software that organisations use to manage day-to-day business activities such as accounting, procurement, project management, risk management and compliance, nobody would be talking about under remittance now.

He said  Koko has not done the right things and has failed.

Uvomata similarly condemned the appointment of a member of the NPA board, Suleiman Auwalu, also a Director of Marine Services at the Ministry of transport, to head the probe panel.

He said Auwalu, is a Director and member of the board who is part of the system, saying he lacks the moral capacity to head or even probe Hadiza.

The NGO however demanded the removal and suspension of both Koko and Auwalu for the case of justice and equity
“The Director of Finance and Admin should also be suspended immediately.
“The head of the probe panel should be changed immediately and after the probe, NPA should acquire the appropriate ERP that automates its accounting processes to avoid future occurrences of issues of this sort,” he added.

According to him, the head of every organization and the board/management are jointly and severally responsible for all acts of right/wrongdoing in that organization, adding that someone must be professionally and directly responsible and every action must be geared towards achieving desired result or objective.