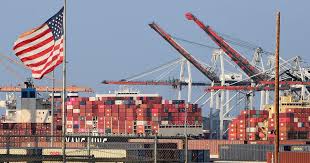 Port of LA
—pilfer 90 containers daily
The rail operator Union in the Los Angeles ports has raised the alarm over the invasion of the port by the groups of criminals whom they claimed regularly pilfer 90 containers every day.
The union said the Intermodal freight trains passing through Los Angeles’ Lincoln Heights neighborhood (East LA) are the target of these “port rats” who pilfer the containers being ferried out of the port.
The rail union lamented that the damages and extra costs to UP add up to $5 million over 12 months, not including the losses and damages experienced by its customers.
The rail line is considering “serious changes” to reduce its traffic volume through LA County, and it believes those changes would worsen the ongoing supply chain crisis.
The rail line through Lincoln Heights leads to a CSX / UP switching yard, and trains often move slowly or stop along the track.
Thieves have taken advantage of this target-rich environment, using bolt cutters to break into boxes laden with delivery packages from major retailers.
The rail siding shows plenty of evidence of the crime: perpetrators are taking choice items and leaving the rest strewn about the tracks.
The discards include COVID test kits, medications, and many other items with high social value but limited black-market resale potential.

UP has its own police department and cooperates with the LAPD and the LA County Sheriff Department to carry out arrests.

Despite its efforts, it has experienced a 160 percent increase in thefts in LA County since December 2020, when the county district attorney changed charging policies.
Even worse, the criminal activity has been accompanied by rising rates of assault and armed robbery targeting UP’s employees.

In an open letter to Los Angeles District Attorney George Gascón, Union Pacific complained that law enforcement personnel have made more than 100 arrests in as many days, but the suspects have been released without charges within 24 hours.

“Of all those arrests . . . UP has not been contacted for any court proceedings,” the rail line wrote.
“In fact, criminals boast to our officers that charges will be pled down to simply trespassing – which bears no serious consequence.”

Since the end of 2020, District Attorney Gascón has ordered his Deputy District Attorneys not to charge certain low-level misdemeanors, including trespassing, disturbing the peace, criminal threats, drug possession, loitering and resisting arrest.

To avoid the social impact of charging these offenses, he has put in place standing orders to focus on “combating violent and serious criminal offenses.”

“Studies show that prosecution of the offenses driving the bulk of misdemeanor cases have minimal, or even negative, long-term impacts on public safety,” wrote DA Gascón in December 2020.

“Agencies equipped with the social-service tools necessary to address the underlying causes . . . are best positioned to prevent recidivism.”

The DA’s spokesman, Alex Bastian, told CNN that the office is “committed to working with law enforcement to ensure collective safety

.” He said that the office has charged cases, including grand theft and burglary, and turned down others “due to insufficient evidence.”

On Saturday, a train derailed in “the same area where the vandalism has been occurring,” UP said in a statement this weekend.

17 cars fell off of the track. The rail line did not say whether the derailment was connected to the high volume of debris on the tracks.

Suez Canal expansion due to complete in July 2023—-SCA